6 Health Benefits Of Baobab That You Need To Know

Baobab fruit is a nutritional powerhouse with multiple health benefits. Learn more about the superfood that comes from Africa’s “Tree of Life” It’s no secret that we LOVE superfoods at Your Super.

And while all of our organic ingredients are worthy of the superfood title, baobab is one superfood that doesn’t get nearly enough recognition.

So we’re shining the light on it!

From its nutritional profile to health benefits, here’s everything you need to know about this unique African superfruit. You’ll also find out how you can easily incorporate baobab fruit (and baobab powder) into your diet.

Have you ever watched "The Lion King"? If so, you’ve already seen a baobab tree; it’s the tree Rafiki lives in!

Baobab (pronounced bay-oh-bab) is a genus of nine specifies of trees that are native to Africa as well as Australia and the Middle East. The iconic African baobab tree can reach up to 98 feet tall while their smooth, barrel-like trunks can grow more than 35 feet in diameter.

During the 9-month long dry season, baobab trees are leafless, leaving their root-like branches juxtaposed against the backdrop of the savannah. This probably explains why many call it an “upside-down tree.”

While this may be true, the baobab tree is better known as the “tree of life.” The large trees are actually more like succulents because their trunks are 80% water. In fact, a single baobab tree can hold up to 1189 gallons (4500 liters) of water, making it a valuable source of water.

The trees also create their own ecosystem. For example, it provides food, water, and shelter for animals and insects of all sizes. Baobab trees also help keep soil conditions humid and prevent soil erosion.

Baobab trees can live more than 1000 years. The oldest baobab recorded is the Panke baobab, which lived for more than 2500 years.

Unfortunately, some of the oldest baobabs are starting to die. While the direct cause is unknown, researchers believe climate change is to blame.

Baobab fruit (also known as monkey fruit — no wonder Rafiki lived in a baobab!) is football-shaped and about 6-8 inches long. It’s the only fruit in the world that naturally dries on the branch — a process takes about 6 months.

Once ready to harvest, the baobab fruit’s exterior changes from green to brown while the shell becomes smooth, like a coconut. The cream-colored pulp (which has a chalk-like texture and easily disintegrates when you put it between your fingers) is removed by splitting open the 3 pound pod with a hammer or large knife.

While a ready-for-harvest baobab fruit may look like a football-shaped coconut, don’t expect it to taste like one! A baobab fruit has a tart, citrus flavor.

As far as nutrition goes, baobab fruit packs a big punch when it comes to essential nutrients:

Baobab is also rich in antioxidants — more than blueberries, goji berries, pomegranate, and acai — as well as polyphenols.

Today, baobab fruit and baobab powder is widely recognized as a superfood — and for good reasons. But its super powers are nothing new. The leaves, fruit, bark, and seeds have been used for centuries to treat many ailments, such as fever, microbial infections, diarrhea, and anemia.

Luckily, you don’t have to wait to get sick to reap the many health benefits baobab fruit and baobab powder can provide.

#1 - It Boosts The Immune System

Vitamin C is known for its immune-boosting benefits. Research shows that vitamin C “contributes to immune defense by supporting various cellular functions of both the innate and adaptive immune system.” And as an antioxidant, vitamin C fights free radicals in the body, which can delay or prevent certain cancers and diseases.

Because humans do not produce vitamin C in the body, we have to get it through food. Oranges have always been a go-to source for vitamin C. However, the pulp of baobab fruit contains as much as 10 times more vitamin C than oranges.

Not only is vitamin C important for a healthy immune system, it also enhances non-heme (plant-based) iron absorption. Baobab contains both vitamin C and iron, making it a great source for both nutrients.

Here’s a not so super fact: less than 3% of Americans get the recommended minimum adequate intake of fiber. Why does that matter? Fiber, which is only found in plant foods, not only aids in digestion, but it also makes you feel full and it feeds the good bacteria in your gut (prebiotics).

Another small study showed that white bread infused with baobab fruit extract “reduced the amount of insulin needed for a given blood glucose response.”

Because baobab is high in fiber, it can also slow down the release of sugar into the bloodstream and control blood sugar levels.

Thanks to the high levels of antioxidants and polyphenols, baobab can reduce inflammation.

Why does that matter? Because chronic inflammation has been linked to health conditions such as type 2 diabetes, heart disease, and cancer — just to name a few.

Although more research is needed, one animal study found baobab fruit pulp to reduce inflammation and protect the heart from damage. Another study showed that in addition to reducing inflammation, baobab extract also reduced oxidative damage to cells.

The high vitamin C and antioxidant content in baobab is beneficial for your skin and hair.

When it comes to your skin, vitamin C protects against UV damage caused by free radicals. It also regulates the synthesis of collagen, a structural protein that keeps skin firm and prevents wrinkles.

With baobab growing in popularity, you may be wondering how an increase in demand affects the sustainability of baobab. The good news is, it’s actually having a positive impact!

Before becoming more mainstream, baobabs were actually at risk of being cut down. But with more people discovering baobab fruit and consuming baobab powder for its many health benefits, it helps conservation and preservation efforts.

Currently, there’s no immediate threat to baobabs; however, intensive harvesting (e.g., animals eating the fruit) can impact the number of trees that grow in the future. Because of that, our partner is helping plant baobab seeds in African communities where few or no baobab trees grow. This not only benefits the communities, but also the environment. 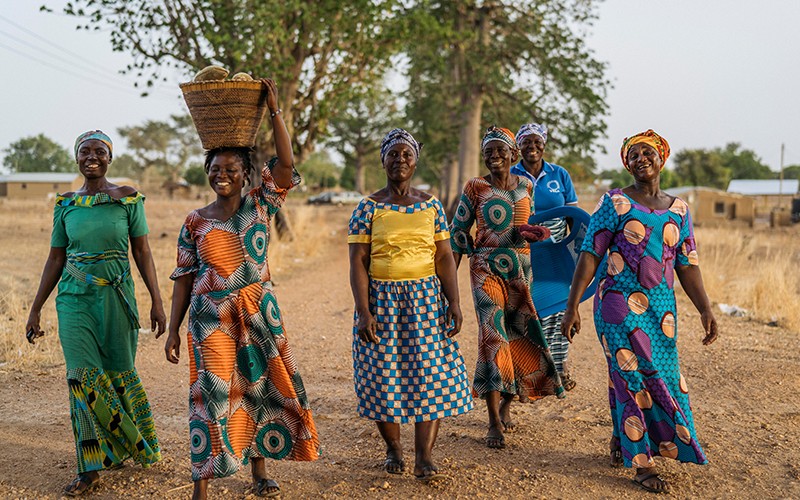 The Social Impact Of Harvesting Baobab

While baobab trees can be found in 32 African countries, we source our baobab from Ghana. And unlike most supply chains, our partner makes sure as much of the profit and production stays within the local communities.

It’s important to note that baobab trees are owned by families and communities — they aren’t owned by corporations or they don’t grow on plantations or farms. Because of this, only the local people can harvest the baobab fruit.

Because baobab fruit flourishes during the dry season, locals can make additional income from baobab when they can’t sell other crops. This is great news for the people of Ghana, especially when you consider 90% of the population lives in extreme poverty.

Baobab harvesting also provides more job opportunities for women, who can only do a few jobs to make money. One of the few rights women have is ownership of trees and the produce. By empowering women to harvest baobab, they can provide basic needs for their family, such as food, education and healthcare.

How To Use Baobab Fruit and Baobab Powder

Both the pulp and seeds of baobab fruit are edible. But because fresh baobab fruit is rare in places where the trees don’t grow, the seeds and pulp are ground and sold in a powder. And because there’s no moisture, baobab powder has a shelf life of up to 3 years.

There are many ways you can use baobab powder, especially in gluten-free and vegan baking. The high fiber content makes it a great binding and thickening agent. If you’re looking for an easy way to add baobab fruit to your diet, it’s one of the five ingredients in our Super Green Mix!